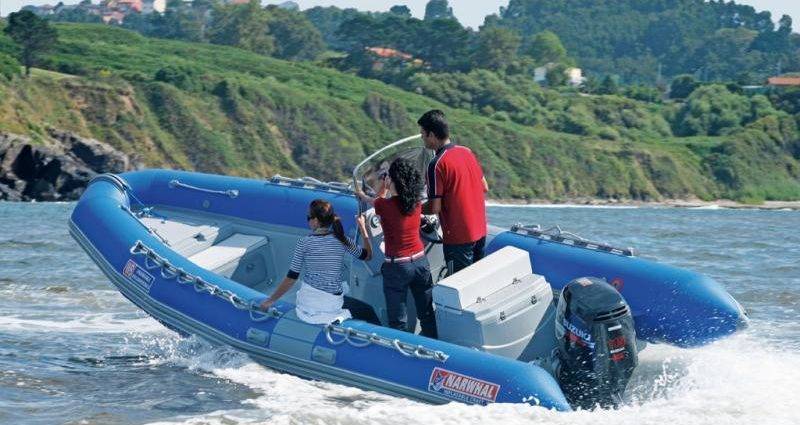 While you can catch fish from the bank, you’ll typically have access to much more fish if you have access to some type of watercraft. This will allow you to get away from the shoreline and put your lure in front of fish holding in deeper or otherwise inaccessible waters.

And while there are a number of different types of boats anglers use to increase their reach, inflatable boats have been exploding in popularity over the last decade or so.

Obviously, inflatable boats have been available for a long time, but older models could rarely withstand the wear and tear a day worth of fishing would impart upon them, which would result in anglers frantically trying to return to shore after piercing their boat with a hook.

But the new generation of inflatable fishing boats is much different.

These new boats are made from much more resilient materials than their historic counterparts are, and they are more comfortable to use. Many also include the types of features anglers want such as:

Given these advancements in inflatable boat technology, it makes sense for most anglers to consider opting for an inflatable boat, instead of a traditional, hard-shelled craft.

But, you must be sure to select a good inflatable fishing boat for your needs, if you are to get good value for your dollar.

We’ll discuss some of the best inflatable fishing boats and cover some of the most important factors you must consider when making your choice.

In a perfect world, you’d be wealthy enough to ignore prices and simply select the inflatable boat that most appealed to you. However, budgets are always a consideration in the real world.

Marketed as a 5-person boat, the Intex Excursion 5 is fairly roomy, although you will be much more comfortable if you only load it with two or three people.

Made with very durable PVC, four-rod holders, two inflatable chairs and a bench-style seat in the middle, this rubber boat is ready for a day of fishing right out of the box.

Most anglers who tried this blow-up fishing boat found that it performed very well, despite its very low price point, although a few did complain about the quality of the oar-holders.

However, you can fit this raft with a trolling motor, which will largely eliminate this problem and allow you to make your way around the water quickly and easily.

Note that some anglers may be nervous about the three-chambered design, as a hole in one of these could cause the boat to sink. The manufacturer explains that this boat has a 1300-pound capacity, which is pretty impressive for such an affordable product.

There aren’t as many inflatable dinghies on the market as there are rafts, kayaks and pontoon boats, so you don’t have as many options to compare if you’d prefer a dinghy.

Additionally, there aren’t as many budget-priced options that are durable enough to handle serious fishing action. Nevertheless, the ANCHEER Inflatable Dinghy is a reasonably affordable boat that is both durable and effective.

The ANCHEER is not specifically designed for anglers, so it does not come equipped with rod holders. However, you can add your own rod holders if this boat appeals to you.

It does feature a keel for improved tracking and stability and an aluminum deck, which may provide you enough stability to stand while you fish. It features a single bench-style seat, and it also includes a transom mount for a motor.

This is a great boat for anglers who want a very stable and easy-to-pilot craft, and who isn’t afraid to pay for it.

The Sevylor Tahiti Hunt and Fish Kayak is an excellent entry-level inflatable fishing kayak, which will give you the chance to get out on the water without breaking the bank.

Although it lacks a number of features that experienced anglers may miss (such as rod holders and a motor mount, among other things), it is hard to find a better inflatable kayak for the money.

However, it does feature a number of interesting and impressive features that aren’t commonly seen.

For example, the Sevylor Tahiti Hunt and Fish Kayak features are moveable seats, which will help keep you comfortable while piloting around the water. Additionally, fore and aft spray guards will help keep the craft from filling with water and keep your legs, shoes, and butt drier.

If you are interested in trying an inflatable kayak, but you don’t want to spend a fortune, the Sevylor Tahiti Hunt and Fish Kayak is a great choice.

It is important to note that while this boat is designed to accommodate two anglers, it only has a maximum capacity of 360 pounds; this means that large anglers may want to look for a boat built to keep more weight afloat.

The Classic Accessories Roanoke Inflatable Pontoon Boat is a great option for anglers who want the experience of a pontoon boat, without having to pay the high prices associated with many other units.

Priced at less than half of what many other fishing pontoon boats are, the Classic Accessories Roanoke Inflatable Pontoon Boat still includes most of the features you’d expect, and most anglers who’ve tried it were quite pleased with its performance and value.

This isn’t a frameless pontoon boat and it has a 350-pound weight limit, so this isn’t a great choice for exceptionally large anglers or those who like to bring along a ton of equipment (many anglers who tried the boat suggested that the raft was best suited for loads of under 200 pounds).

However, it does feature a durable seat, armrest storage and a small storage platform behind the seat.

Unfortunately, this craft doesn’t include rod holders and it is not suitable for use with a motor, but given its low cost, you’ll have to forego some of the features other boats offer.

Another member of the Classic Accessories product line, the Togiak is an inflatable float tube designed specifically for anglers. It is a well-made, feature-packed unit that won’t break the bank, and it has worked well for most anglers who’ve tried it.

The Togiak has an impressive 300-pound capacity and an adjustable, high-backed seat, which make it very comfortable, even when used for extended fishing sessions.

It has a variety of pockets and a mesh storage platform behind the seat, as well as a horizontal rod holder on the back. This float tube also features backpack straps, so that it is easy to carry to and from the water.

Most anglers who tried the Togiak found that it was lightweight, easy to carry and that it could be completely inflated and assembled in 10 minutes or less. However, a number of anglers complained that the seat was not very comfortable, making it hard to fish.

Nevertheless, many others did not seem to have a problem with the seat, so – if possible — you should try this boat out before you make a purchase. Ultimately, this is a great boat for the money and it will give budget-limited anglers a way to access previously out-of-reach fish.

Hello! I'm Alex, an experienced outdoor dude who is passionate about the active lifestyle and spending time in nature. It doesn't matter if you are a beginner or an expert. I do dozens of reviews for camping, fishing, and hunting products. They may be of use for anyone who wants to have a great outdoor time.
Previous Post: Best fly fishing rods in 2019
Next Post: Best Compact Binoculars